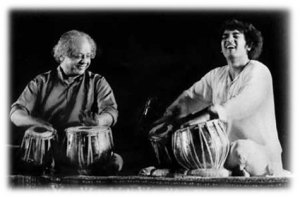 I believe my father is a spirit who was created to work for music by God. But someone up there in the administrative department made a mistake and the stork dropped the child in a farmer’s house.

The atmosphere was far removed from music and there was nothing to remind him of his unfinished work from previous lives, except a restlessness.

It was this restlessness that may have led him to run away from home in Paghwal, Jammu, British India to Lahore when he was just 11 years old. He was trying to reach Gurdaspur where he was fascinated by the tabla, during a visit to his uncle. With little to keep him going, he did several menial odd jobs before finding a teacher in Mian Kader Baksh of the Punjab gharana.

He learnt the basics of singing in the Hindustani style from Ustad Ashiq Ali Khan of Patiala gharana. These classes didn’t have fixed timings and the sessions went on for hours. This is why his foundations were so strong.

I believe that me and my brothers are kindred spirits connected to him over several births. How else do you think I could pick up the language of the tabla when I was only five? What needed to be done would almost appear in bold patterns in my head and I could easily translate those on the tabla just like Fazal and Taufique. It was an unwritten code… a sort of a cord connecting us. This is perhaps how I could take to the stage at 16 with legends like Pt Ravi Shankar, Ustad Ali Akbar Khan and my father.

So it was written. That he will be devoted to music and so will all of us. That is exactly why we’ve been able to carry his legacy forward and build on it in our own way. He was very clear that we should not do what he’s doing but find our own space and grow within that. That is what makes him such a remarkable teacher.

The father
As a father Abba was centred around his art. Other stuff like our studies and games and everything else was what Ammi looked after. Extremely loving and gentle to a fault, even when teaching, his style was encouraging us to complement something he had played and facilitate learning.

It’s not like my little childhood antics of bunking school to run off to the movies or spending hours on the ground playing cricket didn’t reach him but he never seemed unduly bothered with them.

His implicit trust in me and my talent and his foresight which saw how tabla would give me my identity worked in a very subtle way to ensure I remained grounded and focussed.

So more than my excesses as a child, he was interested in what I was doing with opportunities, like in recordings for Madan Mohan or Shankar-Jaikishen.

The only time he got really serious with me was when I was 14. I broke my left ring finger while playing cricket for my school. He didn’t get angry or raise his voice, but was distraught. Here was this man who always spoke so softly and oozed love and seeing him so serious got to me despite my young age. He told me, without even raising his voice, in chaste Urdu, “There is this vision I have for you reaching the pinnacles as a percussionist. You cannot be careless about that.” Cricketers weren’t exactly making as much money as they do now, you see.

As a child I also remember accompanying Abbaji to private mehfils in the homes of the ‘beautiful people.’ While they wined and dined, musicians would wait in the kitchen and only come out when summoned. I personally remember bringing back large tiffin carriers with left-over food as honorarium.

From being made to wait in the kitchen to becoming the cynosure of attention and interacting with legends has been a big leap. Music is no longer something that ‘respectable people’ keep children away from. We’ve had corporate czars and barons like Arvind Parekh and Brijbhushan Kabra taking to music. But if weren’t for the masters, we wouldn’t have audiences for Indian classical music across the world. As for taking their mission forward, we have a long way to go.

Raconteur, mimic and cook
Those were the days of prohibition. You needed permits and all kinds of things for a drink. Obviously musicians and artistes with their limited means couldn’t afford the expensive stuff like that. But there was the option of going to these small hooch joints run by aunties in Mahim, Bandra and Khar.

Abbaji would go for get-togethers where the who’s who from the music fraternity would gather including some big names from the world of film music. Over several rounds of mosambis and santras, people would exchange gossip and anecdotes from concerts, tours and recordings. I must have been eight or ten years old then and often tagged along. I remember the ease with which he would take over the mehfil with his stories, mimicry and sense of timing and would wonder how he does it.

He was also reknowned for his culinary skills amongst his contemporaries. They would applaud him for his magic in the kitchen and make farmaishes for his mutton specialities. Pt Ravi Shankar himself was a great fan of the karela mutton and the kheema he made. In, fact even when they were travelling abroad for concerts and decided to entertain the organisers or local musicians, Panditji would insist he cook and scurry around gathering the ingredients, which in that era were tough to come by.

Donning several hats together was always his forte. Many senior classical musicians like Pandit Ravi Shankar and Ustad Ali Akbar Khan composed music for films but they did a few films here and there. Abba composed music for nearly 40 films and even acted as a second lead in many of them. He would always tells all his shagirds to put their heart and soul into whatever they did. It was not something that he simply told others to do. The way his work, in whatever he did, is spoken about, shows that he lived by that principle.

—(As told to Yogesh Pawar)

We're not around right now. But you can send us an email and we'll get back to you, ASAP